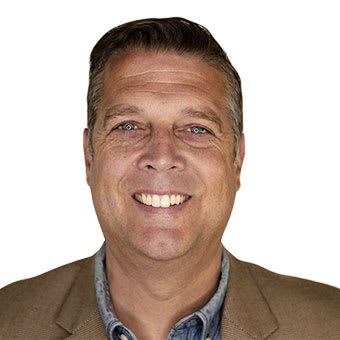 Dr. Scott Leckie graduated from the University of Manitoba College of Dentistry in 1990 and immediately began his career at Assiniboine Dental Group. Scott takes a hands-on, patient focussed approach to his practice in general dentistry, which also includes cosmetic dentistry, implants, and crown and bridge. Scott is also a provider for the Invisalign orthodontic program.

Scott married his wife, Tracy, in 1992 and they have three children and two furry children. Scott enjoys sports, travel, and spending time with family and friends. With a strong focus on community involvement, Scott has played roles in a variety of philanthropic and community organizations which touch both his family and professional life.

Scott believes in the value of maintaining a connection to the University of Manitoba and is past president of the University of Manitoba Dental Alumni Association. Scott has always had a passion for sport and has integrated this into his career. Scott is currently the MDA-appointed representative on the Sports Medicine and Science Council of Manitoba, is a former board member of Sport Manitoba, and was the Mayor of the Athletes Village for the 2017 Canada Games hosted in Winnipeg.

On a more personal level, Scott has volunteered for many years at the ALS Society of Manitoba, coached his 3 children in hockey for 15 years, and provides continuing education by teaching CPR. Scott brings the valuable experience and lessons he has gained from his volunteer commitments to his role as a managing partner at Assiniboine Dental Group.

Scott is a fellow in the International College of Dentists, the Pierre Fauchard Academy and a member of the Academy of Sports Dentistry, and board member of the Manitoba Dental Foundation.

New patients are always welcome. Contact us to get started today.